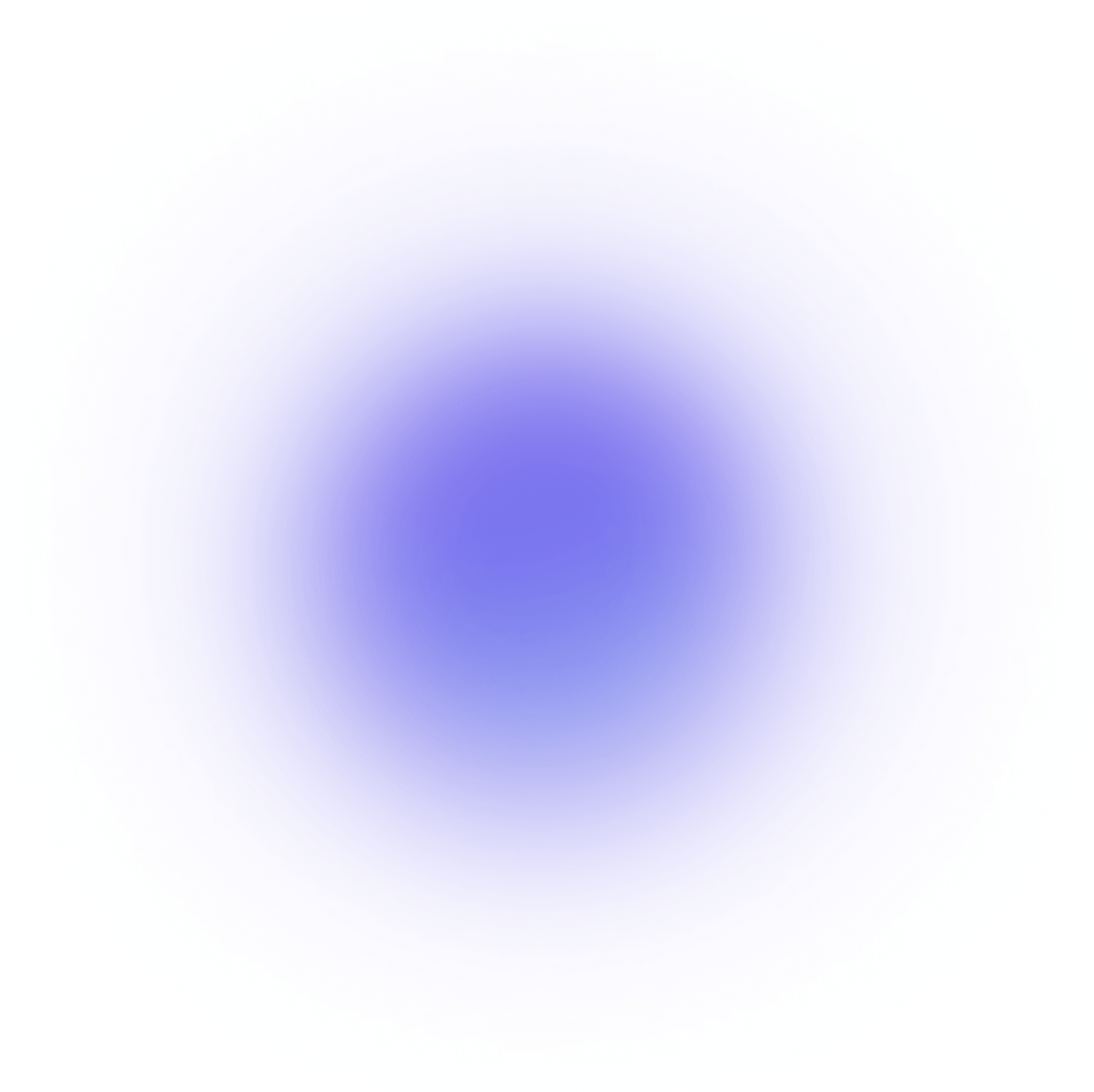 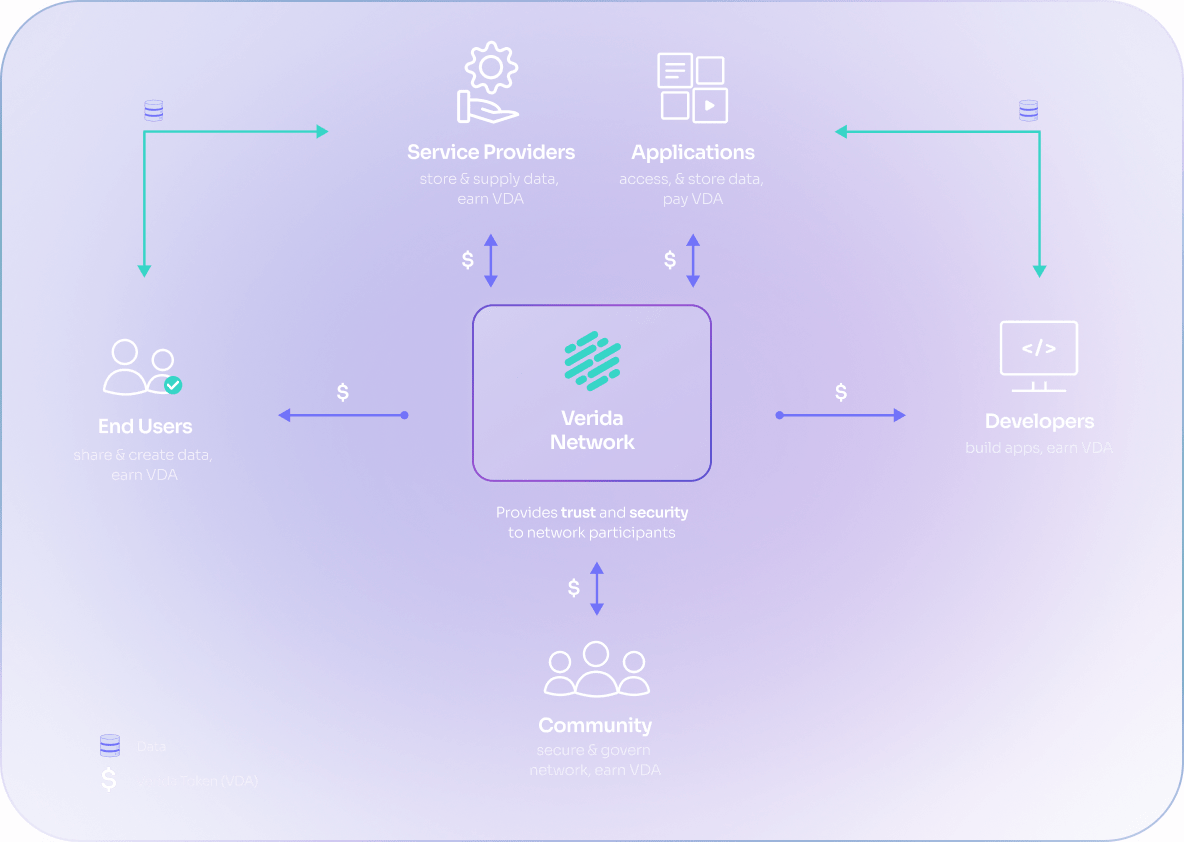 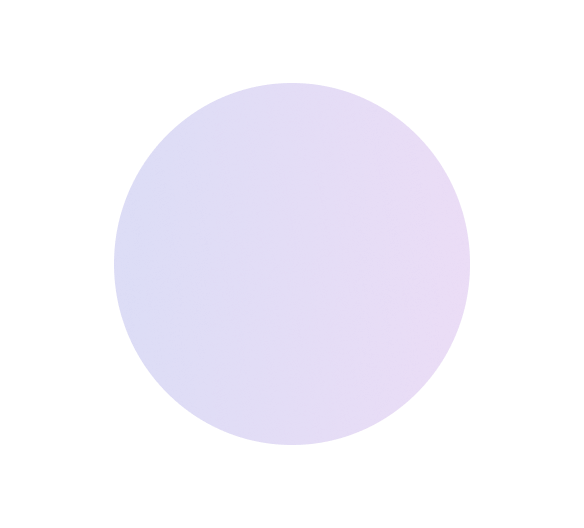 We believe everyone has a fundamental human right to own and control personal data. To have the freedom to control our identity and enjoy agency over how we choose to interact with the digital world.

We seek to create a new era of hyper-personalization, where user data belongs to individuals, is private, and consensually accessed to create new products and services. Similar to how the decentralized finance movement is transforming the traditional monetary system, we provide the technology and tools to revolutionize websites and applications used everyday by billions of people worldwide - decentralizing every single industry, one by one.

The Web3 technology stack is still in its infancy and lacks the infrastructure needed to build feature-rich, powerful applications that can compete with Web2 incumbents. 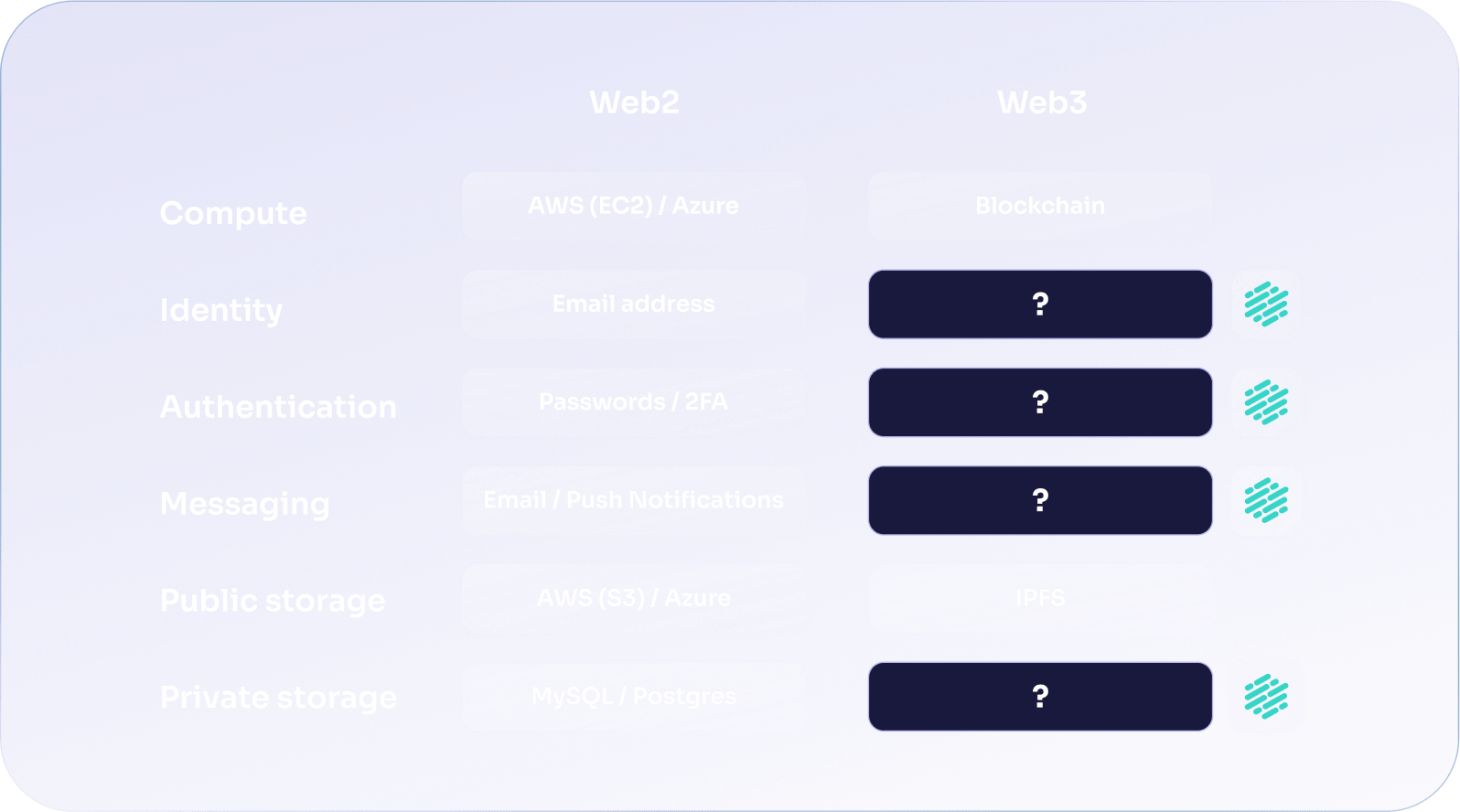 Verida is building a protocol that gives users greater control and privacy over their own data to address these fundamental problems that exist in Web2 and infrastructure gaps in Web3.  Our users can realize value from their data based on their decisions and choices.

Through this, we will enable new business models leveraging data that unlocks an era of hyper-personalization for users, creating a new wave of user centric innovation.

Verida will deliver this future state by:

Verida provides a protocol of servers, libraries and SDKs to enable a network of users to create decentralized identities that can access deconcentrated services on the Verida Network. These offerings include database and block storage, messaging, notifications, and blockchain interoperability.

Verida provides software SDKs that developers can integrate into their applications to leverage the technical capabilities of the Verida Protocol.

Verida provides open-source server nodes that can be operated by anyone on their own infrastructure, to earn tokens on the Verida Network.

Verida facilitates decentralized network services as centralized APIs will transition across to smart contracts on the Verida Network once their technical requirements stabilize.

Verida provides a reference implementation of a ‘Data Wallet’ (Verida Vault), a mobile application for end users to create decentralized identities, securely store their private keys, and interact with the Verida Network with its supported blockchains.

Verida has a roadmap of network extensions that expand its capabilities towards a global network of trusted, verifiable, self-sovereign data. 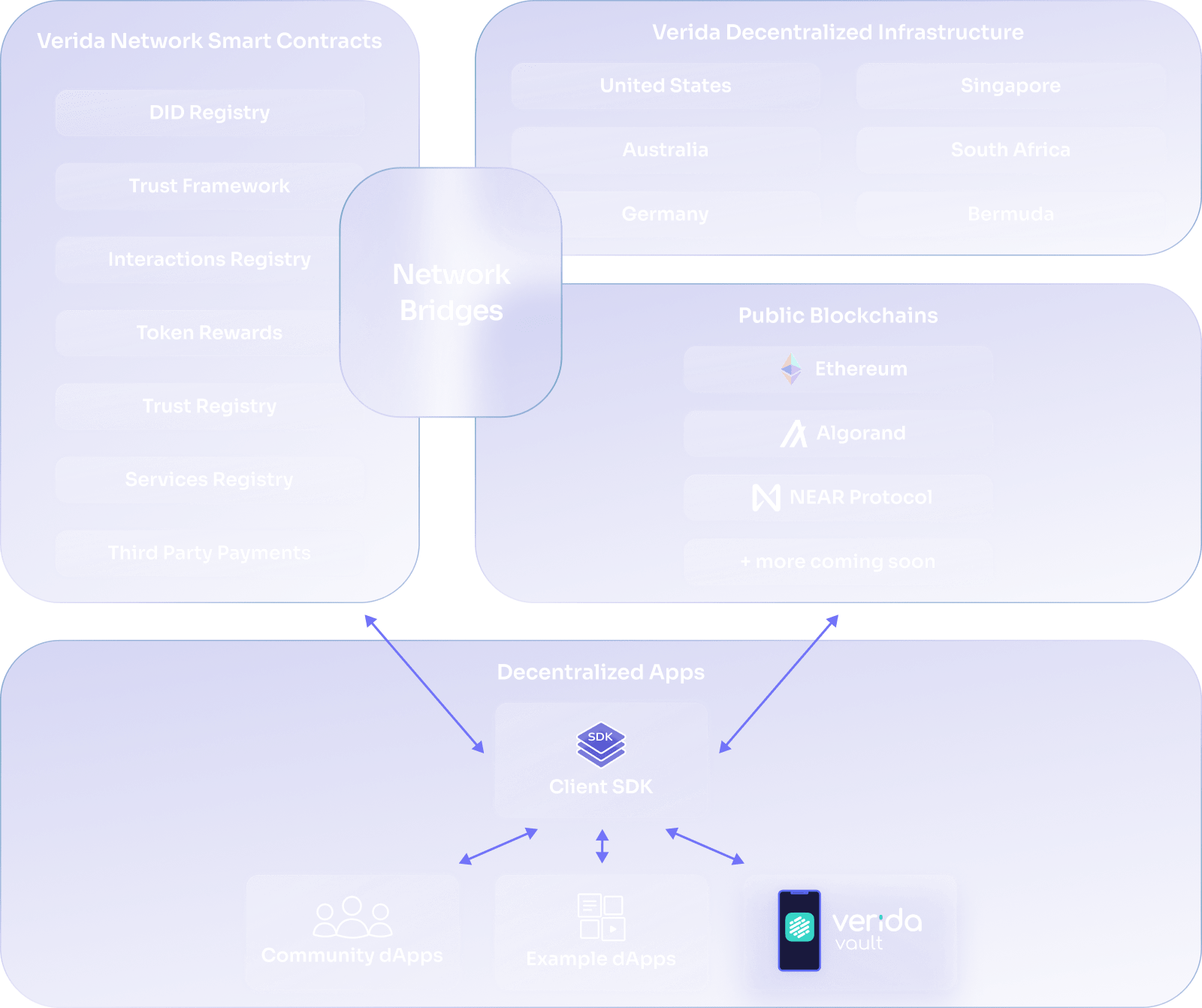 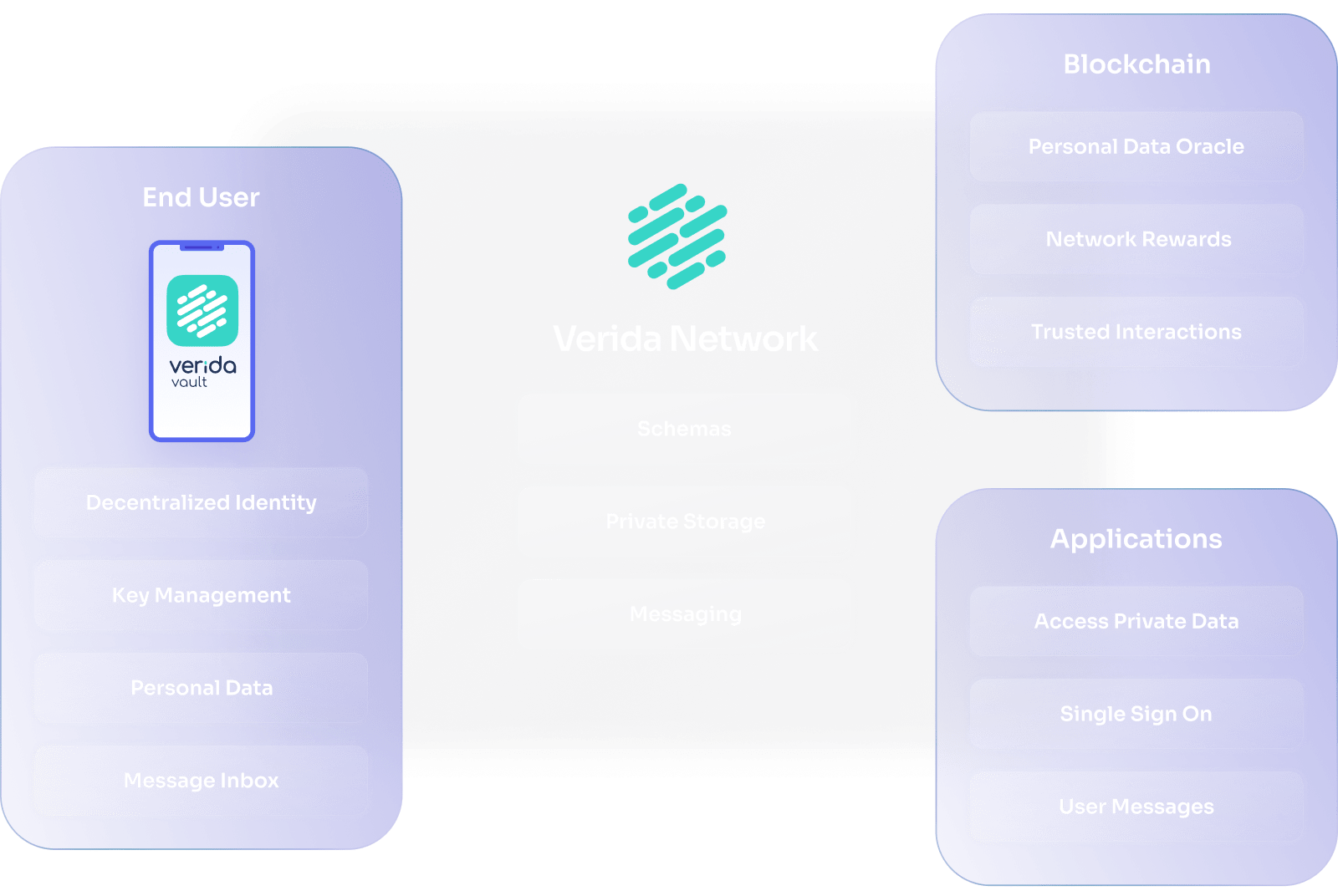 This includes the following core capabilities that are supported within web browsers, NodeJs servers and React Native mobile applications.

Transact SDK - An open source library that extends the Client SDK to enable applications to easily request users to conduct on chain transactions.

Trust SDK - An open source library that extends the Client SDK to enable applications to participate in the new trust economy. It also includes smart contract libraries for every supported blockchain to verify off-chain data generated by the Verida Trust Framework.

API Connectors Framework - This framework provides a library of tools to help developers build API connectors that pull data from centralized systems, normalize the data into common schemas, and store it in the user’s personal data Vault.

The Verida Vault is a mobile application that acts as both a ‘Data Wallet’ and a ‘Crypto Wallet’ for end users. It provides private key management and a user-friendly interface for interacting with the Verida network and supported blockchains.

The Vault provides users with the following core capabilities:

The Verida Network comprises of the underlying protocol, technology and documentation developed by Verida. Developers can leverage the Verida SDKs to use and contribute to the code to improve the network. Service providers can deliver infrastructure to the network by running nodes that users can select to use.

The Verida Network provides a means to: 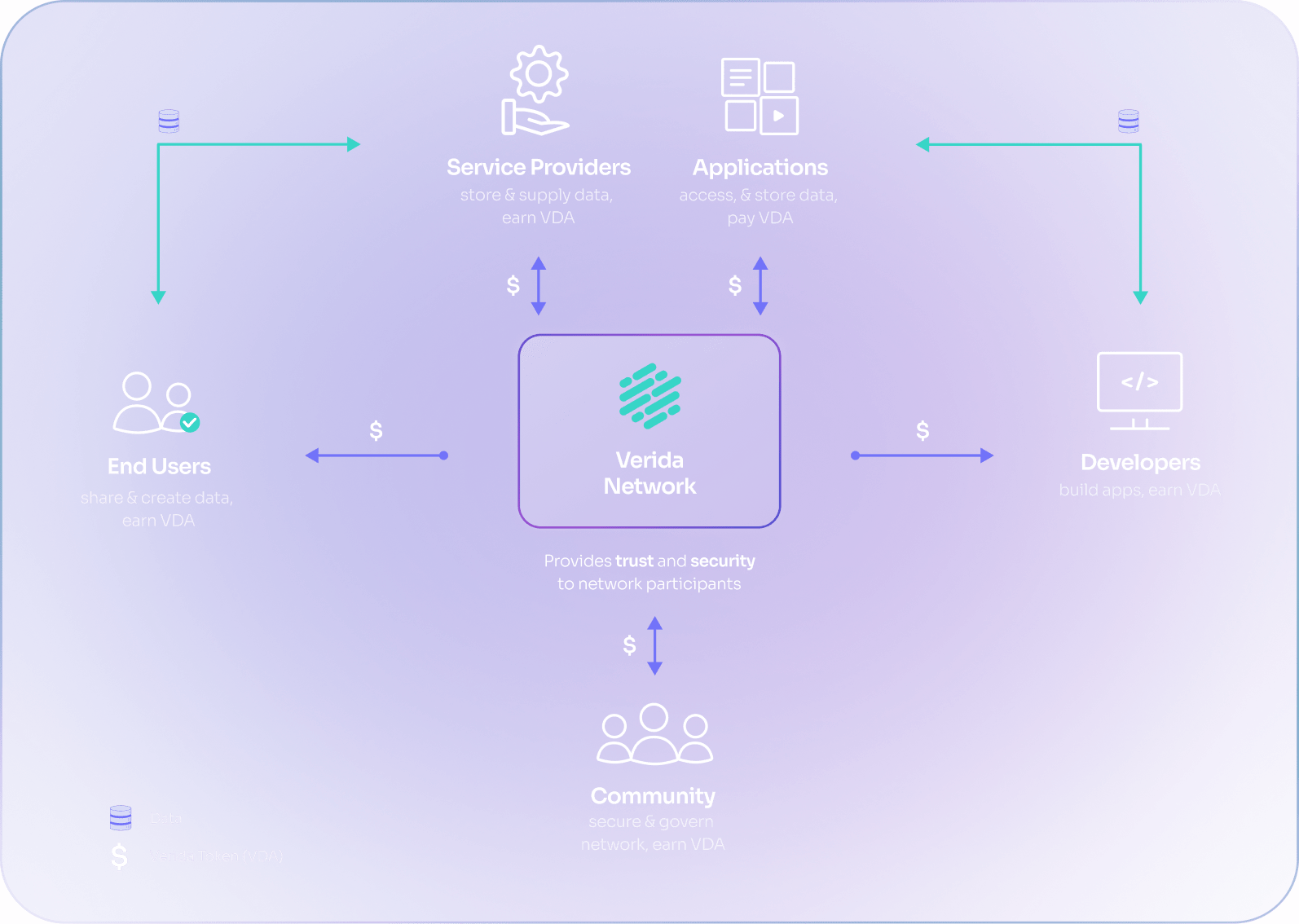 The Verida Network and token will establish a new data economy that disrupts a range of existing industries and technologies.

As users connect more data, there’s more aggregate value for both the user and network. The value of user data increases as it becomes denser. Incentivising the onboarding of data into the network is outlined in the Network Incentives section.

Value is captured in the Verida Network through data sharing, messaging, data validation processes, and new market creation. There are many new markets already being explored by Verida partners that include; Hyper-personalized insurance offers with decentralized claim management, Patient owned healthcare data with data marketplaces for researchers.

Creating a native token allows for the design of economic incentives in the Verida network that provides control over the setting of monetary policy and equitable rewards for all network participants. 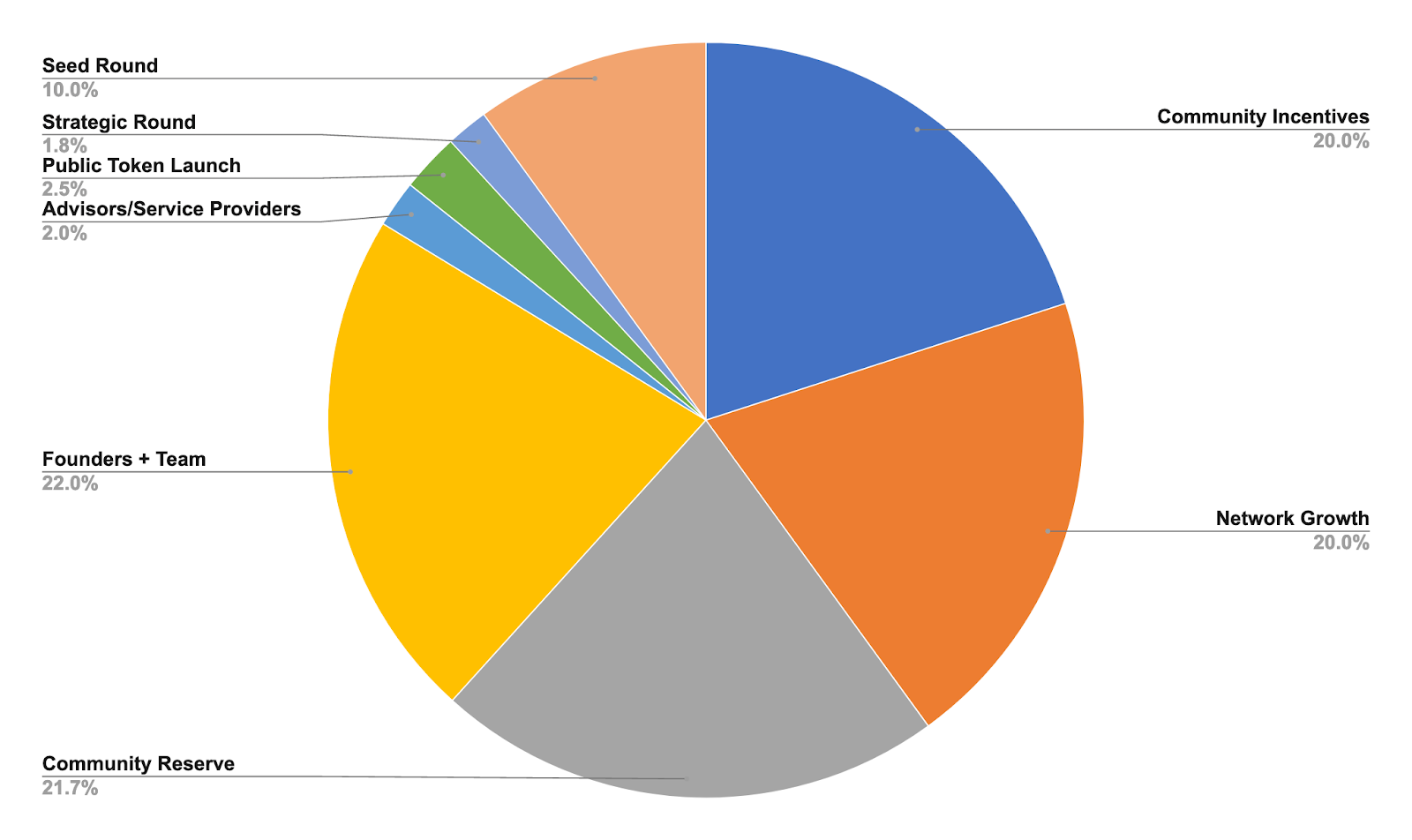 Reach out to our team and chat with our fast-growing communityof developers and innovators.

DISCORD
Join our engineers in #dev-chat